MODERN DAY
Modern day appreciation and popularity of lavender in North America began as long ago as 1933 with the formation of the Herb Society of America which adopted “Herbs – for use and delight” as its motto.
L.J. Wyckoff, a resident of Seattle, pioneered commercial growing of lavender in the Pacific North West in 1924. In 1928, some 7,000 rooted cuttings were planted out in Bothell. Although identified as L. Angustifolia, it was confirmed by 1930 -31 that all were L. x Intermedia. In spite of the depression and the elimination of government funding Wyckoff established a lavender farm on a rented plot of 10 acres. Small but significant donations trickled in and eventually Wyckoff bought 80 acres of land next to the 10-acre plot. He erected buildings, including a distilling room and a boiler house. By 1950, Wyckoff had been producing lavender oil for nearly 25 years and regarded as the foremost authority on the commercial cultivation of L. Angustifolia in North America.
By the late 1970’s interest in the genus expanded as did many new selections which include the hardy lavenders such as ‘Buena Vista’, ‘Melissa’, Royal Velvet’, ’Sachet’ to name only a few. Lavenders grow well on the Olympic Peninsula, Washington State, Oregon, California and Texas. Lavender also is cultivated in Canada in favoured spots of Nova Scotia, on the Niagara Peninsula, Ontario. On Vancouver Island and the Okanagan regions of British Columbia, where lavender overwinters well, the numbers of farms continue to expand with the Cowichan Valley Lavender Labyrinth perhaps being the newest on Vancouver Island when it opened 2010. 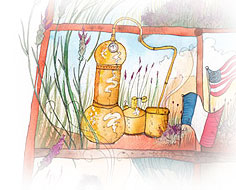 1900 CE
The first modern distilleries built in France on the Sault plain and Barreme around 1914, dramatically improved peasant farmers’ way of life through the harvesting of wild lavender. As lavender essential oil could be stored until a profitable price could be obtained, the farmers now could plan ahead. During the First World War when modern antiseptics were depleted, the public was asked to gather up garden lavender so the oil could be used to dress war wounds. In addition, over time, lavender has been associated with love, chastity and an aphrodisiac. For example, “A sprinkle of lavender onto the head of a loved one, would keep the wearer chaste”. On the other hand, lavender was supposed to inspire passion; the famous nursery rhyme “Lavender blue, dilly dilly” was written in 1680 and talks of “Whilst you and I, diddle, diddle…keep the bed warm”. Full-scale cultivation in France only began in the 1920s.  In 1923 100 tons of lavender essential oil was produced, of which 90% came from wild lavender. Today most essential oil comes from cultivation. English lavender production ebbed and flowed over a few centuries until 1932 when Norfolk Lavender Ltd. was founded, and until recently there were no other lavender farms in England. Norfolk Lavender Ltd. is still by far the largest and best know, welcoming almost 150,000 visitors a year. Other notable names of modern growers includes Downderry Lavender established in Hadlow, Kent in 1997 and has become the country’s premier lavender nursery and now holds over 250 species, hybrids and cultivars. Then there is Jersey Lavender Ltd started by David and Elizabeth Christie in 1983 on nine acres in the parish of St. Brelade. On the farm is the second oldest National Collection of Lavandula in the UK. Most importantly, it contains several commercial French field varieties, wild source material and other introductions collected by the Christies in southern Europe and around the world.. 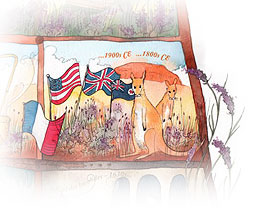 Lavender farming began in Australia as early as 1894, when the government established a farm in central Victoria. The venture did not progress, apparently due to bureaucratic problems. In 1921 the Bridestowe lavender Estate in southeast Tasmania was established and became the best-known lavender farm. Bridestowe has been growing lavender for 90 years. Over the succeeding years, the production of lavender has blossomed.  In 1995, The Australian Lavender Growers’ Association was launched and since then national conferences have been held annually.
Queen Victoria fell in love with lavender oil. She ordered that every room be polished with lavender and beeswax, so that the scent was with her whenever she — and her young husband, Albert — were indoors. In all probability Queen Victoria used lavender products from the famous lavender company Yardley and Co. of London. Yardley first began in 1625 when a young Yardley asked King Charles I for a concession to manufacture soap for the entire city of London.  Apparently, the young Yardley used lavender perfume to scent his soap. 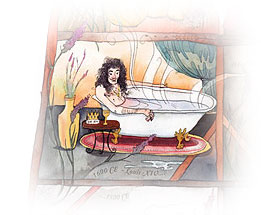 1700 CE
Louis XIV (Sun King) of France enjoyed lavender scented baths and it was he who directed the construction of the “Hôtel des Invalides” (Army Hospital)—a military complex and home to this day for officers and soldiers rendered infirm by either injury or age. Louis XIV initiated the project by an order dated 24 November 1670. While pharmacology was still quite rudimentary, les Invalides pioneered new treatments and set new standards for hospice treatment, which may have included the use of lavender.
In 1770, the Parliament of Provence, aware they had in their possession a plant with a wealth of beneficial attributes, regulated the cutting of lavender and its extraction into an essential oil.
Attempts at lavender cultivation in America occurred as early as mid-1600’s on the east coast, but a notation appears in 1672 that ‘lavender is not for the climate. 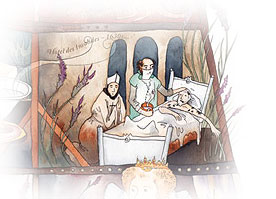 1630 CE
During 1630’s the terrible ‘Great Plague’ that ravaged Provence in France sweeping through Toulouse, four thieves ransacked the city without contracting the disease; when finally caught, a judge decided to commute their death sentences, if they revealed the secret ingredients to the mysterious decoction that gave them immunity from the disease. The formula now known as the “The 4 Thieves Vinegar” was a combination of thyme, lavender, rosemary and sage steeped in vinegar. In London around the same time (1630’s), during the Black Death, the practice of attaching a bunch of lavender to each wrist would protect the wearer against the deadly disease. This story could have some validity as fleas, which lavender is known to repel, transmitted the plague. 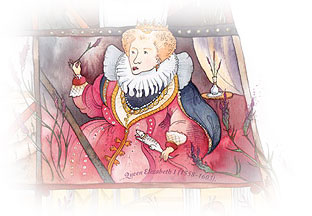 1400 CE – 1600 CE
The golden era of herb gardens in Britain was from the late 1400’s to the mid 1600’s and reached its peak during the reign of Queen Elizabeth I (1558-1603). Good Queen “Bess” required lavender conserve at the royal table. She also wanted fresh lavender flowers available every day of the year, a daunting task for a gardener considering the English climate. Queen Elisabeth, who loved lavender, used it in tea to treat her frequent migraines and as a perfume. (Lavender is one of the oldest perfumes used in England.) She encouraged the development of lavender farms. Lavender first distilled as early as the 16th century to extract the essential oil that accumulates in its purple flowers. Botanists and pharmacists were quick to research its medicinal properties.’ 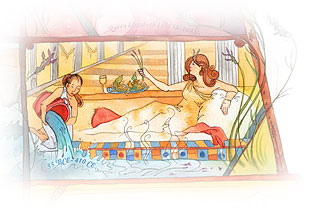 55 BCE- 410 CE
Ancient Romans recognized lavender for its healing and antiseptic qualities, for its usefulness in deterring insects, and used it in washing. Roman soldiers took lavender on campaigns with them to dress war wounds. Lavender was strewn on the floor to sweeten the air, fumigate sick rooms and as incense for religious ceremonies. Romans used it to scent their baths or their freshly laundered linen. The word “lavender” comes from the Latin verb “lavare”, which means, “to wash”. They also used this precious aromatic plant for its soothing and healing qualities. 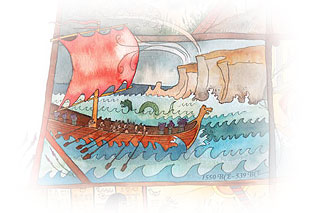 1550 BCE- 539 BCE Phoenicians Civilization
They became the most skilful shipbuilders and navigators in the Mediterranean and became the greatest merchants of ancient times. They sold rich treasures from many lands. They worked the silver mines of Spain, passed through the Strait of Gibraltar, and founded the city of Cadiz on the south-western coast of Spain. They sailed as far away as Cornwall, Britain where they acquired tin and it is thought may have first introduced lavender(Stoechas) to Britain..

BCE – 31 BCE
Ancient Egypt, it was first documented that the cultivation and use of lavender occurred about three thousand years ago. The ancient Egyptians held it in high regard, using it to produce soothing and healing ointments, perfume and for embalming. When the tomb of Tutankhamen was opened, jars filled with unguents containing something resembling lavender were found. Wealthy men would put solid cones of this unguent on their heads, which, as it melted, covered their bodies with perfume.